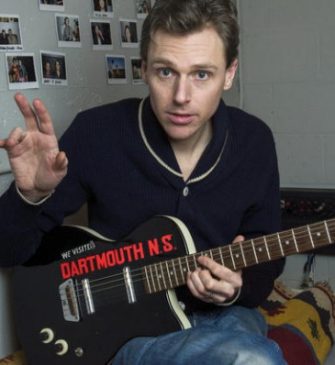 For Joel Plaskett, real rock ‘n’ roll has become an endangered species. “Real rock n’ roll rolls,” he said. “It tumbles, and the tumble is gone from most modern recordings, which have become very scripted and locked down.

Joel Plaskett broke out in characteristic laughter several times as he outlined the story arc that runs through his latest album, Joel Plaskett & the Park Avenue Sobriety Test. For about five minutes of a lengthy and candid telephone interview, he explained to the Montreal Gazette – song by song – how the central character (who might, in part, be him) goes through periods of rose-coloured reminiscing, while grappling with the harsh personal and political realities of the present, all the while seeking human connection and finally finding good-natured resignation.

But the Nova Scotia rocker’s easy chortling in conversation doesn’t imply that the emotional journey chronicled in this loose, energetic and instantly memorable rock opus doesn’t have its serious side.

In fact, Captains of Industry, in a different era, might have been called a protest song.

“The captains of industry are driving us home/ Selling us lies, tapping our phone/ Shaking us down and we don’t even know it/ If you want real love, show it,” Plaskett sings during the moody, angry ballad.

“I have nothing good to say about this (federal) government we have in place right now. I think they’re dismantling and changing things. You become a parent and that makes you even more mindful of what kind of world is being carved out for your kid,” said Plaskett, whose 7-year-old son, Xianing, is listed among the album’s dedications.

A stately, emotional version of Hard Times, Stephen Foster’s 1854 lament for the poor, seems sadly relevant 161 years after its publication.

“It’s weird, because I’m not a political singer,” Plaskett said. “That’s not something that’s usually shown up in my music, but all of a sudden it kind of did. I’m getting a little more active in actually talking about things that bother me. Previously, I was, like, ‘Well, I’m an entertainer.’ ”

Plaskett, who said he’s from a “left-leaning background, (with) hippie-ish parents,” said he gets along with people of all political stripes and tries “to move through the world without too much friction.”

Images on the packaging and musicians on the disc link to Plaskett’s own past. Current and former members of his band the Emergency appear, with fiddle player J.P. Cormier and pedal steel player Dale Murray, among others, while elements of the art from previous albums turn up on the cover.

Recording in his own New Scotland Yard studio in Dartmouth, Plaskett and his musical collaborators sought a looseness the singer-songwriter said he rarely finds in rock music anymore.

“We cut half the record live off the floor, including vocals,” Plaskett said. “Nobody had really learned the songs. We just showed up, we went over them, everybody found parts and we jammed on them for three or four hours until they kind of gelled and all of a sudden, we’d have a take.”

Plaskett, a serious record collector who refers to Just Walking In the Rain by the Prisonaires and Joni Mitchell’s Blonde In the Bleachers in the lyrics of the new album, encouraged the musicians to fill in any gaps left between the sung lines – and for inspiration, he referred to old favourites.

“Everything is so polished right now,” Plaskett said. “People are bored by it. Nothing feels like you’re hearing an in-the-moment take. Listen to London Calling or Exile On Main St. It’s one giant mistake! It’s beautiful! I was trying to channel the kind of Bob Dylan rollick where things just tumble away.

For Plaskett, real rock ‘n’ roll has become an endangered species. “Real rock n’ roll rolls,” he said. “It tumbles, and the tumble is gone from most modern recordings, which have become very scripted and locked down.

“Producing records for other people has taught me that you’re just trying to get a version that works. And what it should feel like is an encapsulation of what it would feel like on a good night – with a heightened sense,” he said. “You add things to make the production more interesting, but at a certain point, you want it to feel like there’s a spark there.”

Among his influences this time around was Jim Ford’s 1969 go-for-broke country-soul cult classic Harlan County, which Plaskett takes a few minutes to rave about. ”It has a ferocity to it, where you can tell they’re cutting a lot of it live and he’s just going for it,” Plaskett said. “He sounds like George Jones fronting the Four Tops.”

Although he only just turned 40, Plaskett has been in the music business 23 years. “When I think back to my old band, Thrush Hermit, even though we were never that successful a band, we felt like we were in the Who. I felt like we were making really important music,” he said. “It seems weird now that I’ve been in it this long.”

But hitting that milestone birthday was not a factor in the way the album frequently looks at the passage of time, Plaskett said. The theme was more informed by the changing circumstances – not always for the better – of people who have passed through the singer’s life: friends have passed on, neighbours have faced poverty and some have struggled with substance abuse. Their ghosts are in the songs.

But Joel Plaskett and the Park Avenue Sobriety Test is, at least in part, about finding happiness in both the present and the past, Plaskett said.

“The interesting thing about the past is that usually, you erase the bad times from your mind and just hold on to most of the good memories. I think it’s a scientific fact that the human mind does that,” Plaskett said, letting the laugh ring out once again.