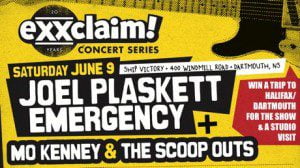 Exclaim! turns 20 years old this year and to help us celebrate, Canadian indie rock favourite and two time Exclaim! cover star Joel Plaskett has curated an intimate night of great live music in his home town. The show will be taking place in his East coast home of Dartmouth, NS on June 9. Joel Plaskett will be joined by singer-songwriter Mo Kenney, who will be releasing her Joel Plaskett produced debut later this year, along with Joel’s Dartmouth punk rock faves The Scoop Outs. It’s all going down at Ship Victory, which can only accommodate a small crowd.

We’re giving away tickets to the show (advance tickets have SOLD OUT, so this is the only way to get tickets), plus one grand prize winner will be flown out to Dartmouth from anywhere in Canada to see the show and stay in the city. If that’s not enough, you’ll be given the opportunity to sit down for a coffee with Joel and check out his studio, where his latest album Scrappy Happiness was laid down.

For your chance to win this awesome grand prize and the opportunity to celebrate with Exclaim! and Joel Plaskett in his hometown of Dartmouth, NS, correctly answer the skill testing question, which you can find here.