A True Troubador – Unplugged & Loving It

On one of the snowiest nights of the winter, I took in one of the year’s best rock shows. It was a mostly acoustic set by Joel Plaskett, who began rocking out as a teenager twenty years ago in Halifax, Nova Scotia. Eight albums later, under such band names as Thrush Hermit and the Joel Plaskett Emergency, plus a near-score of notable albums he’s produced for other artists, Plaskett is a highly developed songwriter who flashes great rhyming instincts and an instantly likable and charismatic performing style. Following a great warm-up set by young band, The Great American Novel, a denim-clad, lanky Plasket stepped on stage in the Studio at Webster Hall by himself, playing a bright-sounding Gibson four-string tenor guitar. This weathered instrument, which to my ear shared tones and sonic qualities with hammered dulcimer and autoharp, jibed beautifully with Plaskett’s bright pop melodies and voice, resting as it does somewhere in the upper register. After a bit, he was joined on stage by Peter Elkas, who played a Gibson acoustic fitted out with de luxe pickups patched in to a Fender amp with plenty of fuzz and reverb, providing a sonic counterweight to Plaskett’s treble tones. Peter is a hot lead guitar player, so though this performance had no full band, it had more than full enjoyment of chops, and a real rock feel. The duo worked comfortably through a full sampling of Plaskett material, “Through & Through & Through,” “Let Me Down Easy,” “North Star” (my personal fave of the whole evening), “Love this Town,” and “Deny, Deny, Deny.” At one point during these offerings Plaskett invited to the stage female artist Ana Egge, whom I had heard sing back-up with Rose Cousins last year. Now a trio, the harmonies became more enveloping and the tunes even sweeter.

Plaskett had an easy familiarity with the boisterous Monday night crowd, bantering back at folks after their many song requests. This was an audience that knew much of his repertoire. He was funny about it, and diplomatic, as he’d say something like, “Now that’s a very interesting request, and maybe I’ll play it later, but right now I had this one in mind.” He explained how he comes to play a 4-string tenor guitar this way (lightly paraphrased): “One time in a store I saw this tenor guitar, first one I ever saw, but I didn’t have the money to buy it (150 bucks). So I said to my dad, ‘Hey, Dad, there’s this really nice guitar downtown.’ So he bought it and I got to play it.” After what by my count was the 16th song of this generous set, the musicians all left the stage, though a round of lusty clapping soon brought Joel back to the mic for what became a quite funny interlude before his encore. He took an iPhone out of his Cowichan vest and proceeded to sample some of his music library for us through the house sound system, with him miming the romantic vocal stylings of R&B artist Bobby Womack. Then, he played a version of his own “Fashionable People,” which has been widely seen because of a video he made of him dancing with leggy models, only in this new version the lyrics had been rewritten with goofy kids’ lyrics, making it into a suitable nursery school song. Joel acted out all the parts–funny, clever stuff. With that, his bandmates Peter and Ana returned to their places and he launched into the true encore, a love song to Canadian geography of the land and heart, “On the Rail,” with evocations of the scenic Cabot Trail, trans-continental train rides, sailing ships, and the stars in the sky.

As the musicians packed up, opportunities for conversation and mingling arose. Joel was just as personable off-stage as on, meeting and greeting many fans, including or two drunk ones. Earlier in the day the two of us had exchanged a tweet about set times, so he recognized me and we shook hands as I thanked him for the great show. I bought his CD, “Three,” and then wandered over to where Peter Elkas was winding up some cables. He’s a really nice-looking guy, and he was just as nice to meet. I told him how much I’d enjoyed his guitar tone and he explained how lucky he had been to find a scarce pick-up–mounted in the center hole of his instrument in the pics below–that allowed him to get those sounds from what is after all still just a Gibson acoustic. It sounded more like Neil Young’s Old Black than a simple acoustic. I added that I enjoy the R&B sound he gets in his own recordings, and joked that I think of him as the “Boz Skaggs of Canadian R&B,” and we had a laugh about that. Seriously then, I recommended to Peter my favorite Boz Skaggs album, “Moments,” a classic record from 1971. Getting ready to go back into the sleeting night, I spotted the guys from opening act, Great American Novel, and introduced myself to them and handed out a few of my cards. They’re a fun bunch, and really replete with bookish associations, from their band name to their songs. I appreciated that and told them of my own book background. I learned that one of them, drummer Aidan, is the son of notable American fiction writer Jim Shephard, author of You Think That’s Bad. I’m going to keep an eye out for gigs of theirs and hope to hear them again. I said good night to friend Ontarian Nick Wynja, of Hack/Make whom I’d run in to here, a fellow member of the #R3NYNJ, a hashtag that signifies the CBC Radio 3 fan group of New York and New Jersey.

I had a great time at this show, a veritable “Joel Plaskett – Unplugged,” with him singing about 18 songs and playing almost 90 minutes. My first time seeing him–what a fun, passionate performer, full of banter and creative juice. He’s also a really great writer. Check out The Great Gray Bridge to view some pictures from the show as well – including this shot of Joel’s set list from the night: 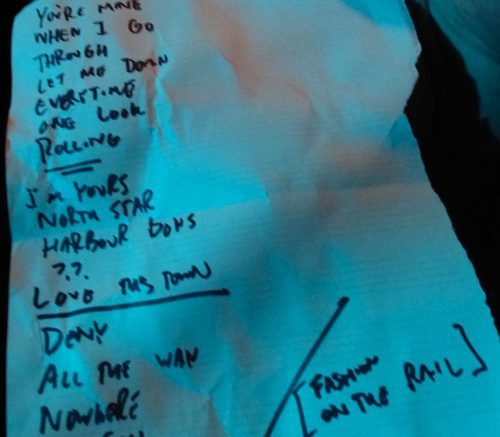