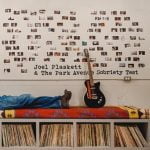 Nova Scotia’s favourite son Joel Plaskett has spent his career developing a style of pop music that is distinctively Canadian. From his early days with alt-rockers Thrush Hermit through his work with his band the Emergency, the winner of multiple music awards continues to please his legion of fans.

The P.A.S.T is an album that covers all the Plaskett musical bases, and if you haven’t been tuned in to this guy, this could be considered akin to a compilation of what he really does best.

The first half of the album finds the artist in an energetic, Canuck-pop mode — his ability to write sensible, interesting lyrics buoyed by the kind of hooks that pinch perfectly are testament to his years of writing experience. The next three tracks — Captains of Industry, For Your Consideration and Hard Times — are softer sonic-brush strokes, again buoyed by Plaskett’s nifty wordplay. The album closes with a couple more cheery charmers that, if they don’t lift your mood, will at least have you adoring the first-rate band. Extra credit for the crystal-clear album production.

Definitely watch for this one to be on more than a few year-end best-of lists.