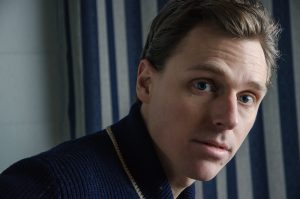 And it certainly wouldn’t be out of place for some of the Celtic-inspired tracks, namely the fiddle-filled On A Dime, to be blasting in the background of your favourite Irish pub.

That coincidental timing aside, the title was actually inspired by a street in Dartmouth, NS, where a former neighbour explained that a bent guardrail in a dangerous, winding part of the road was the ultimate “Park Avenue Sobriety Test” for boozy drivers.

Plaskett, thinking the name sounded similar to the Kinks’ classic 1968 album The Kinks Are the Village Green Preservation Society, knew he had the album title and theme — the only thing he didn’t have were the songs.

“The places where I’m tapping into on this one, I’ve done versions of it before on different records,” Plaskett says from a downtown Toronto bar. “Why I think the acronym for this one (P.A.S.T.) is fitting in a weird kind of way, is that this record touches down in the past and all the places I’ve been before.”

For the uninitiated, the still-boyish-looking Plaskett, who is set to turn 40 next month, is a veteran around the Canadian music scene. He fronted the influential ’90s alt-rockers Thrush Hermit (who had a hand in creating P.A.S.T. along with his longtime touring band the Emergency). Two decades later, he continues to pad his excellent body of work.

And to say Plaskett is proud of his roots would be an understatement. He even has a line in one of his new tracks, Alright OK, that states “Halifax is the land of the free, I don’t care what the anthem says.”

How does he explain that one to his fans in Vancouver?

“I write as if I’m in the first person and I do draw from my own experiences when I form these songs, Plaskett explains. “I have On A Dime which is a reminiscence about the good old days while Alright OK is about being untethered… a guy in a bar shooting his mouth off. I love the east coast and I’m happy to sing that line like I mean it. I love overstatement and something emphatic – to me it’s more interesting to take an extreme position than it is to be like ‘everything is great!'”

Plaskett carefully explains that he doesn’t consciously set out to have any type of sound, it’s just that Nova Scotia naturally influences his songs.

“I’m most influenced by my contemporary musicians on the east coast,” says Plaskett. “That’s not to say other Canadian music doesn’t have an effect on me, it does. But I’m right there in the heart of it and I feel as though I have a connection there.

When asked about turning the big 4-0, Plaskett puts on his philosophy hat to explain the important day.

“I’m comfortable with getting older and gaining experience,” Plaskett says. “I may have a crisis in three or four years, but I don’t fear it like some people do. If I’m going to leave my seven-year-old boy with any knowledge, I have to get older in order to do that.”

Plaskett is overjoyed when the conversation turns toward his old band Thrush Hermit, and he even tells a story about a time when the group passed up the chance to be on a huge film’s soundtrack.

“We turned down some stuff that we thought would be lame, so we didn’t seize the opportunity,” Plaskett laments. “One of those opportunities was to be on the Dumb and Dumber soundtrack and we never pursued it, for whatever reason. We were on the Mallrats soundtrack, however.”

We’ll drink to that.