Juno-winner Joel Plaskett teamed up with his 71-year-old dad to make Solidarity.

By Nick Patch, The Toronto Star 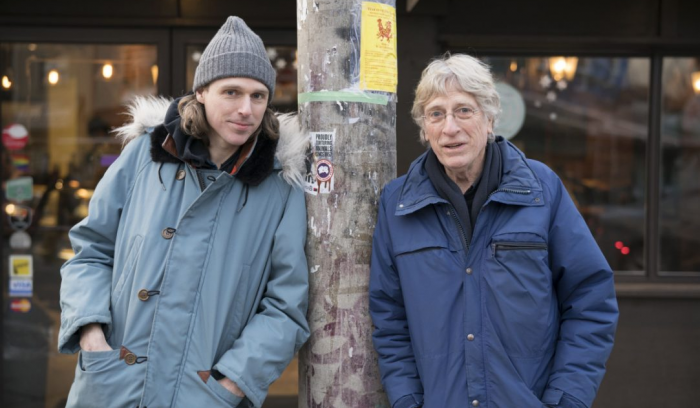 Joel Plaskett, left, and his dad, Bill Plaskett, teamed up for their Solidarity album and will be performing at Massey Hall in April. (J.P. MOCZULSKI / FOR THE TORONTO STAR)

When Bill Plaskett first moved his family from Halifax to Lunenburg in the 1990s, it took only a short while — social folkie that he was — before he stitched together a network in the local folk scene and started drinking in the coffee house circuit.

It was on one of those evenings, at Dalhousie University’s Grad House café, that Plaskett remembers sharing the stage with his then-14-year-old son, Joel.

“We did a couple instrumental numbers,” Bill recalled, remembering their performance of Bert Jansch’s “Angie.”

“That was one of the memories I have and Joel remembers it, too. That was when we did our first public performance together and in a folkie kind of vein.”

Only a few years later and before Joel’s teenage years were through with him, the younger Plaskett had already graduated from intimate coffee houses to become the co-frontman of the promising rock outfit Thrush Hermit. Bill was a persistent presence then, too, particularly since Joel was too young for unaccompanied admittance into the clubs Thrush was rocking.

Bill remained a proud observer and occasional collaborator over the ensuing decades as Joel built a Juno Award-winning career as a prolific songwriter and perceptive producer.

Only now, however, have father and son teamed up as equal partners in new music, with their contemplative new record Solidarity. And once again, it’s in that “folkie kind of vein.”

The winsome 11-track collection, which features both Plasketts’ voices and songwriting, was recorded in a month — a surprisingly intense month, both players attest — but its roots stretch back much farther.

Bill penned “No Sight Compares” in the ’70s when the beauty of nature seemed to offer hope amid a troubled relationship. The 71-year-old’s “On Down the River” recalls his upbringing in postwar London, when he would watch from the bank of the Thames as boats chugged in and out, while the album’s poignant title track finds the elder Plaskett reflecting on working in New Orleans and journeying around the United States in 1966 before eventually moving to Canada and starting a family.

Of course, Joel’s musical education began with his dad. When Joel, now 41, was really little, he would listen as Bill rehearsed with his band, Starboard Side, or hosted boisterous kitchen jams. By recording with his father, Joel not only tuned in to a family connection, he also re-engaged his interest in folk music.

“It was fun to make. Challenging, actually — more challenging than I thought.” [READ MORE]