The Grid TO: What do you say, Joel Plaskett? 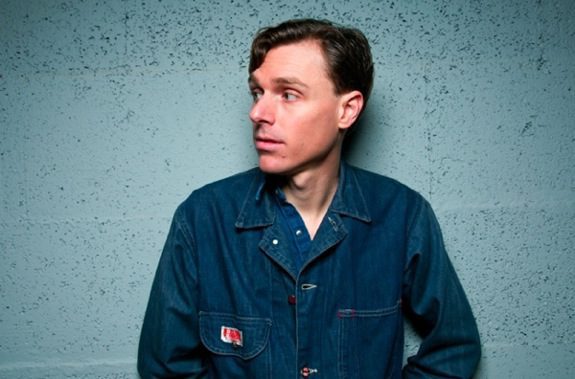 The Canadian indie-rock icon, whose latest album is Scrappy Happiness, on some things that make him happy, from retro toys to mindful chatter.

In the past year, Plaskett’s stage setup has included a few curious items in addition to his bandmates Dave Marsh and Chris Pennell: a life-sized bust of Wayne Newton and two guitar-playing primate figurines called Rock ’n’ Roll Monkeys. Along with their axe-slinging spirit, Plaskett says he admires the monkeys for their craftsmanship. “They were made in the ’60s. They’re tin toys, they’re battery operated, and they light up and strum. I saw them and said, ‘Fuck, that’s so cool.’ I love physical objects that have a presence—things that are manufactured, but [in pretty small quantities].”

“I grew up in a family of conversationalists, so language is a big part of [my music]. All my songs are tangents that hopefully have a centre. My way of being [creative] is to talk and talk and circle an idea. I’ll talk forever until I figure out what it is. The people who are privy to that process are like, ‘Yeah, you made your point. I’ve been listening to it for three weeks.’” Plaskett has been married to visual artist Rebecca Kraatz since 2006 (though they’ve been a couple much longer than that), and he’s still amazed by the way their respective disciplines influence the way they communicate. “My wife sees things, I hear them. We go out together and she’s like, ‘Did you see what they were wearing?’ and I say, ‘No, but did you hear what he said?’ And she says, ‘No, I was looking at her earrings!’”

He’s got an unbreakable bond with his hometown of Halifax.

Plaskett’s ever-growing profile means he plays to packed houses across the country, but he characterizes the life of a musician as a very solitary pursuit. “I don’t spend that much time with my family and friends. I spend it in the studio, and then I go on the road. I did a lot of international travelling last year, and it was a strain on my mind. I found it was affecting my friendships.” He says the need to stay grounded is the reason he’s never followed his famous friends to bigger cities like Montreal and Toronto. “The idea of getting too big for your britches in the Maritimes will not serve you well. Keeping a connection to your family, your home, and your community—that’s the tether, man. I’d be adrift if it were just me and my music. That’s probably why I’ve stayed in Halifax my whole life. I feel safe there.”

Even after nearly two decades on the road, he’s still set on maintaining his momentum.

The theme of Scrappy Happiness is finding contentment in where you are, not just where you’ve been. Plaskett has worked hard since he signed his first record deal back in 1994, but he says he’s achieved some level of satisfaction. “Right now, in my life, I feel…I hesitate to use the word ‘blessed’ because it sort of takes on a religious connotation, but I feel fortunate. I’m really enjoying myself.” A prolific songwriter with a relentless touring schedule, Plaskett says he isn’t sure when—or even if—he’ll ever take a breather. “I just try to keep it moving. My favourite artists kept it moving: Neil Young and Bob Dylan released a ton. Zeppelin made records on the road. You can tell some bands were so busy they just crammed in recording whenever they could. There’s something to be said for that momentum. It’s not rocket science, it’s rock ’n’ roll.”