By Michelle Cameron, The Coast
Photo by Jordan Blackburn

You may not have needed another reason to love this town, but you can rest assured, Joel Plaskett has given you one, with his new business venture, New Scotland Yard Emporium (45 Portland Street). When the humble 800-square-foot retail space—attached to Plaskett’s studio —freed up this past summer, he jumped at the opportunity to pack in the elements he wanted in close proximity: coffee, music and a salon. Plaskett says the business trifecta has allowed him to collaborate with other local businesses and buds to collectively help bring some buzz back to his beloved community. Sip some coffee, spin a record or get your hair snipped at the grand opening this Saturday, Oct 24, from 8am-5pm. 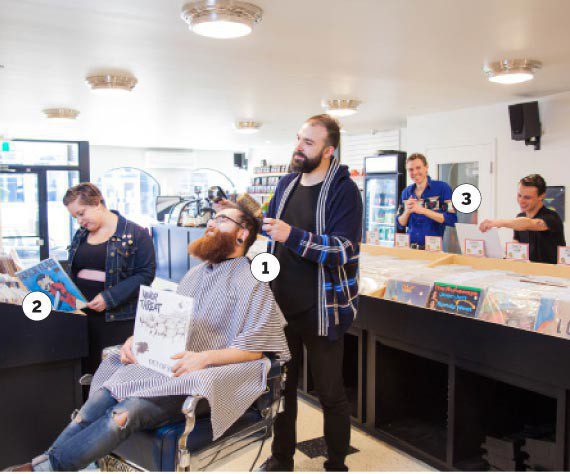 1. “There’s a risk there, but it’s a shared risk between all of us. I may have put the pieces of the puzzle together, but this is also everybody else’s,” says Plaskett of the collaborative effort it took to create the Emporium. The shop joins the forces of Jimmy Donnelly, owner of Taz Records; Chris Pennell, Plaskett’s bass player and a hair stylist at Elk’s Haircutting and Alex Babineau and Cait Holmes, the barista and baker team behind Honey & Butter. “This is a street, a community and a business that I have a best interest in, but I don’t have to micromanage it,” Plaskett says. “It’s allowed everybody to do what they do well and I’m proud of what’s in there.”

2. “I want people to feel like you’re stepping into a shop that could have been there since the ’50s without that ‘recreated retro diner look’,” says Plaskett, who admits that overseeing renovations, though worth it, has put some grey hairs on his head. With minimalist design, fusing nostalgia with musical aesthetics, the Emporium effortlessly ties three businesses into one tidy hub. Patrons are invited to grab a cake and coffee to go at the front, skim the lean selection of records in between, or snag a cut and colour at the back—all in one stop. “It’s small, but it’s good,” says Plaskett. “There’s already a great energy on the street and we’re enthusiastic to be adding to that.”

3. For Plaskett, the motivation was twofold: create something fit for everyone, also allowing him to stay close to his family. “If it’s successful enough to generate a bit of money and employ people, that’s really neat in a climate where it’s hard to find,” he says. “But also, it allows me to dial back touring. I’m not going to stop performing but now it doesn’t have to be the sole form of my livelihood. I can pick and choose what I want to do while being closer to home.”