The CBCMusic.ca festival comes back to Toronto 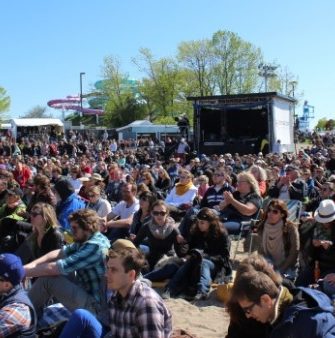 Crowds arrived early at the inaugural CBCMusic.ca Festival to get a good spot on the sands of Echo Beach.

CBCMusic.ca is bringing the CBCMusica.ca Festival back to Toronto! This year’s festival, produced by Live Nation Canada, will take place at TD Echo Beach (909 Lakeshore Boulevard West) on Saturday, May 23, 2015.

Tickets for the CBCMusic.ca Festival will go on sale Friday, Jan. 30 through Ticketmaster. Tickets are available at LiveNation.com, all Ticketmaster outlets and by phone at 1-855-985-5000.

For more details, visit CBCMusic.ca/festival. And to sweeten the deal, those who purchase tickets through the advance sale will receive a CBC Music toque!

General admission tickets will be available for $39.50 (plus FMF and service charges), free for kids 12 and under. The show is all-ages.

This year’s line up will not dissappoint:

Bahamas – Toronto’s own Juno Award-nominated Bahamas came into the spotlight in 2009 with his album Pink Strat. With three albums, mass critical acclaim, and extensive international touring under his belt, Bahamas will take the stage at Echo Beach and perform from his new album, Bahamas is Afie.

Patrick Watson – This singer-songwriter and his band have performed with The Dears, The Stills, Philip Glass and James Brown. They are Juno Award-winners and Polaris Prize Award winners. With four albums on their resumé, the band is currently in the studio working on their next release.

Coeur de pirate – Francophone singer-songwriter Beatrice Martin has been playing the piano since the tender age of three. She released three full-length albums by the age of 25 and has received international attention for her music, including Juno Award nominations as well as four Felix Awards, one Canadian Independent Music Award and one Victoires de la Musique Award.

The Strumbellas – The six-piece folk-alternative-country band won the 2014 Juno Award for Roots & Traditional Album of the Year for their album We Still Move on Dance Floors. The band has been extensively touring North America and is currently working on a new album.

Lindi Ortega – Canadian Country Music Award-winner, Juno Award- and Polaris Prize-nominated Ortega has played with the likes of Brandon Flowers (The Killers), toured all over the world and performed on Jimmy Kimmel Live!, and Later…with Jools Holland. Ortega released her latest album Tin Star back in 2013 to critical acclaim.

Fred Penner — As a two-time Juno Award-winner for Best Children’s Album, Penner has been entertaining families for more than forty years. With an extensive catalogue of albums, and a staple on CBC-TV (his show Fred Penner’s Place, aired on CBC-TV from 1985 to 1997), Penner will take the stage at Echo Beach to perform some of his beloved hits.

Tanika Charles — Since stepping out of her role as a back-up vocalist for both Zaki Ibrahim and Bedouin Soundclash to front her own fiery, ‘60s soul and Motown-influenced band The Wonderfuls, “Mz. Chawls”, as she is sometimes known, has quickly become the most buzzed-about soul singer in Toronto.

Choir! Choir! Choir! — Daveed Goldman and Nobu Adilman (a.k.a. DaBu) started Choir! Choir! Choir! as a weekly drop-in, no-commitment singing event in February 2011. Now happening twice weekly, and open to anyone who likes to sing new arrangements of pop songs, C!C!C! boasts a dedicated and passionate membership of inspired singers from in and around Toronto. They have performed live with Patti Smith at the Art Gallery of Ontario, Tegan and Sara on the Juno Awards, at TEDx Toronto 2014, and the 2012 Toronto International Film Festival Closing Gala at Roy Thompson Hall.

In addition to the music performances, the CBCMusic.ca Festival will also highlight some of CBC’s exceptional talent. This will include a special live edition of The Debaters hosted by award-winning stand-up comedian Steve Patterson, Kids’ CBC crafts and activities with entertainment throughout the day including Mamma Yamma, and appearances throughout the day by CBC Radio 2 hosts Rich Terfry and Tom Power, with more to be announced at a later date. 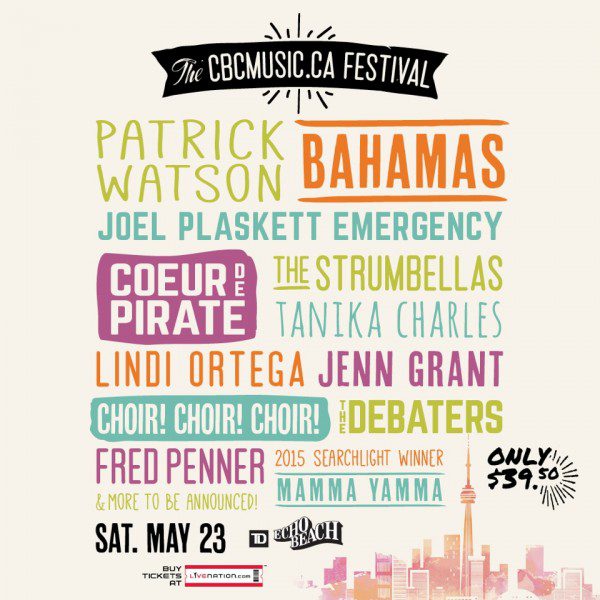