The Brunswickan: JOEL AND BILL PLASKETT DELIVER A HIGHLIGHT OF SHIVERING SONGS 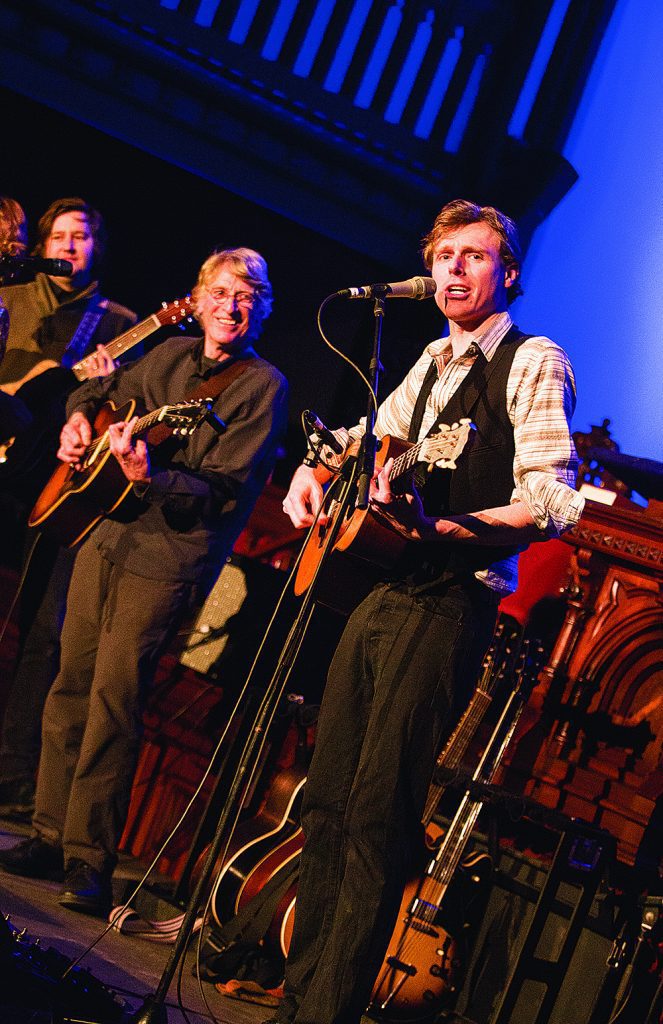 By Rob Trites, The Brunswickan
Photos by Brad Parker

Joel Plaskett was in town for the annual Shivering Songs festival and teamed up with his father Bill to play a sold-out acoustic gig at the Wilmot United church last Saturday night, Jan. 23.

The father-son duo that commonly play shows together, opened the performance with beautiful harmonies, overlapping their vocals to create haunting melodies that rang through the vaulted cathedral church.

Joel played all his hits but mixed in some classic folk songs in what seemed to be a rather impromptu set-list as the duo bantered back and forth.

As Joel often does, he told the crowd the story of where the inspiration for “I love This Town” came from. During the explanation he caught himself using an expletive that starts with the letter F. “I’m telling the story, I’ll swear in church if I want,” he joked.

He had the crowd laughing all night and for one song he pulled out a Casio keyboard with a pre-recorded percussion beat on it and emulated a kid he saw rapping in downtown Dartmouth. He eventually used the electric keyboard to play a rendition of his song “Rewind, Rewind, Rewind.”

At one point, Joel gave up the stage to father Bill who also displayed storytelling ability and sang a coming of age song he wrote about living in England. It became clear where Joel received his musical gifts as Bill dove into his song, masterfully moving his fingers up and down the frets and passionately delivering the words he had crafted years ago.

Jen Grant, who played the opening set for the headline show, joined Joel on stage and turned Plaskett’s classic “Nowhere With You” into a duet.

At the end of the show, the church pews emptied as the two received a standing ovation and were forced to come back out to give the crowd an encore before they ventured back out into the shivering cold.

Along with thanking the crowd, Joel sang the praises of Shivering Songs and the city of Fredericton.

It is likely Fredericton will be seeing much more of Plaskett in the coming years.

The Halifax native has locked down his Maritime roots, as he has become an extreme advocate for local entrepreneurship and has taken on many of his own projects.

Last October he opened the New Scotland Yard Emporium next to his Dartmouth recording studio.

The Café, salon and record shop was created in hope to stir up local business in downtown Dartmouth and to promote the Maritime music scene.

Developing this community is important not only for the local scene but for Joel as well as he won’t have to rely as heavily on revenue from touring.

“I’m not going to stop performing but now it doesn’t have to be the sole form of my livelihood,” said Plaskett in a recent interview with The Coast. “I can pick and choose what I want to do while being closer to home.”