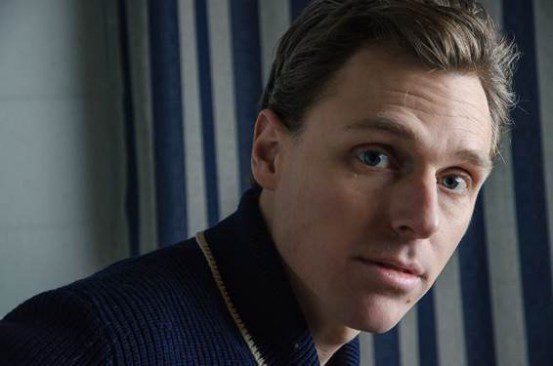 By Aaron Brophy, The Bluegrass Situation

One of the most intriguing songs on The Park Avenue Sobriety Test, the eighth album from east coast Canadian troubadour Joel Plaskett, isn’t his own.

The 160-year-old “Hard Times,” originally known as “Hard Times Come Again No More,” written by Stephen Foster and published in 1854, is a timeless hymn of the struggle that’s been covered by the likes of Emmylou Harris, Bob Dylan, Johnny Cash, Bruce Springsteen and Iron & Wine.

“I just love singing the song. It’s a beautiful melody,” says Plaskett, who was taught the song by his father Bill Plaskett. “The lyrics are powerful and they’re socially conscious … music should take on that roll. For me it has to take on that personal nature and so this is now starting to feel personal, and I guess what it comes down to is the stuff I’m starting to get upset about is feeling like an affront to me personally.”

This upset, this feeling of affront is a new side to Plaskett. A gregarious conversationalist and spirited, often-hilarious performer, the idea of Plaskett morphing into a Billy Bragg-like protest singer is … unexpected.

“I’ve never considered myself that either,” says Plaskett, “although I’m finding more and more, I can’t turn a blind eye to this stuff that’s really pissing me off. I’m using Twitter now more to retweet things that I’m writing about, that I care about. I’m concerned about things like climate change and just corporate control and the way the country Canada really seems to be leaning to the right, getting pushed to the right.

“It’s bigger picture. It’s about caring about the Earth. And about caring about the people that you don’t get along with. And that you don’t agree with. Having some empathy for everybody, regardless of their ignorance or their political leanings. And that’s hard when anger enters the conversation on either side and it just flares up. So I’m wrestling with that a little bit. It shows up on the record and I kinda couldn’t avoid it anymore.”

Plaskett also tackles the one percent on the song “Captains Of Industry.”

“I think what’s happening is we’re starting to realize things aren’t changing and some degree of activism or public protest and a lot of voices have to get behind these things to change it. And things can change, like the Civil Rights Movement changed things. People at a certain point were like, ‘There’s never going to be an end to slavery.’ Well, you know what? That’s not true. In North America at least. But I kind of had to raise my voice a little bit. I mean, I’m still an entertainer and I don’t know that much about what I’m talking about, but it’s the idea of critical thinking, it’s the idea of a healthy questioning of authority is very important because there’s so much to question and there’s a lot of stuff going on of a very dubious nature all under the idea that it’s protecting us.

“Maybe it’s that I’m a father now and you get a little bit more like, at some point I’m gonna die and I want to know that the world that I’m leaving hasn’t turned into the most horrible, violent, bankrupt environment.”

Through Plaskett’s more than two decade-long recording career he’s always been particularly adept at navigating new sonic territory. He fronted the ballsy rock band Thrush Hermit in the mid-’90s during that period when Halifax, Nova Scotia was being hailed as “the next Seattle.” When the Hermit unravelled in 1999 he struck out on his own, putting out works of quintessential Canadiana like Down At The Khyber’s “True Patriot Love” all the while vacillating between folksy solo works like 2005’s La De Da and 2009’s Three and fist-pumping albums like 2007’s Ashtray Rock and 2012’s Scrappy Happiness with his Crazy Horse surrogates The Emergency.

The Park Avenue Sobriety Test, uniquely, acts as a sampler plate of all these sounds Plaskett has previously explored (“It kind of has a bit of everything I’ve done in the past,” he says), as well as a crate-digger’s nod to a lost gem country-soul album from 1969, Jim Ford’s Harlan County.

“It really influenced a couple songs on the new record,” says Plaskett, who recorded The Park Avenue Sobriety Test mostly live-on-the-floor. “‘Broken Heart Songs’ and ‘Alright/OK,’ those two songs for me are me trying to channel a little bit of that country, go for it, everybody playing steel guitar, everybody just playing all at once.

It’s a little sliver of rock history that nobody knows about, which makes it all the better to be influenced by it, to mine it. So I’ve become really obsessed with that record. I bought 10 copies of that record when they reissued it so I could give it to people for Christmas presents.”

When you step back and take a wider look, The Park Avenue Sobriety Test has a sort of reflective, taking-stock-of-the-world quality. Perhaps it’s due to the album’s checklist ticking forays through Plaskett’s previous ventures in folk, rock and country, his emerging focus on social justice, the fact it was recorded with a collection of friends past and present (current Emergency members Dave Marsh and Chris Pennell, ex-Emergency member Tim Brennan, Ian McGettigan from Thrush Hermit, Peter Elkas, as well as notable east coasters J.P. Cormier, Mo Kenney, Erin Costelo and Dale Murray), or because the album has a rather telling acronym, The P.A.S.T.

“The record is sequenced in a way and the story in my mind is both a personal one and also thinking about like the disparity that exists in this modern world we live in between the wealthy and the poor,” says Plaskett. “And then there’s this reminiscence of the good ol’ days, so you try and stay in the past when you remember these good times like a rose-colored glasses kind of thing, like everything looks better in the rearview mirror.

“I’m very lucky. You can carry a kind of guilt just out of the fact that things are easier for me than they are for other people who are struggling. I haven’t lived in poverty, but we’ve lost some friends and had sad things happen. Those things give you pause for thought and I’m just reflecting on that.”