Noisey – Dad Rock: Why Joel Plaskett Made a New Record With His Pops 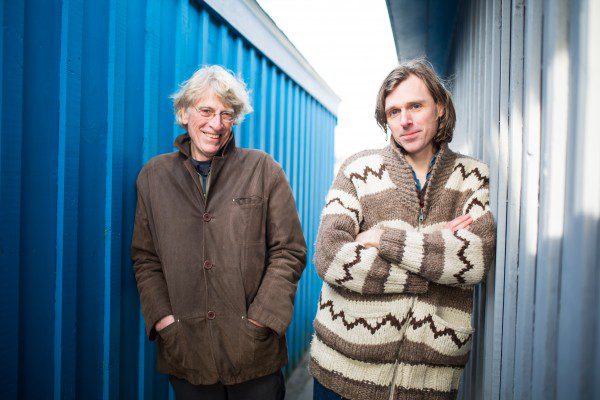 We spoke to the father-and-son duo about connecting and staying young through music.

Joel Plaskett hasn’t aged a bit. His voice hasn’t lost any of its youthful lilt since I first interviewed him back in 1995, when we were both teenagers. He’s still as rhapsodic and talkative as he was when he was touring Smart Bomb with his old band Thrush Hermit. And even though there are a few greys poking out of his hair, he even looks as though time has not yet caught up with him over all these years.

Of course, Joel Plaskett has in fact aged. Duh. And the way that it’s most obvious is the extensive set of recordings he has amassed. Plaskett has proven himself to be one of Canada’s most reliable songwriters, both in quality and frequency. In 1999 alone, he released Thrush Hermit’s swan song, Clayton Park, the debut album by Neuseiland, his side-project with Super Friendz members Charles Austin and Drew Yamada, and his debut solo album, In Need Of Medical Attention. Subsequently, he has steadily released at least one album of his own every other year, not to mention produced recordings by Two Hours Traffic, Al Tuck, Sarah Slean, Old Man Luedecke, Mo Kenney and Shotgun Jimmie, while running his own label, New Scotland Records. Along the way, he has also rounded up a handful of Juno nominations (including a win in 2010 for Adult Alternative Album of the Year) and a couple of Polaris Music Prize shortlists.

For his latest project, Plaskett has come full circle and teamed up with the man who first introduced him to music: his dad, Bill. The idea to collaborate has been a long time coming. Joel and Bill have been performing together on a regular basis over the last decade and even worked on songs together in the studio. It took a while but they finally realized the inevitable: they should actually sit down and make a record together. Their album, Solidarity, marks the debut album for Bill, who has long made home recordings of folk songs he’s written both before and after he immigrated to Canada from the UK. For Joel, it was not only an opportunity to work with his biggest musical hero, but also explore another side of his roots through the folk music he grew up with. Noisey got both Joel and Bill Plaskett on the phone to talk about their familial collaboration.

Noisey: So whose idea was this record?
Joel Plaskett: I don’t know, it might have been somebody else’s.
Bill Plaskett: Occasionally when we play a show someone will say, “You should record an album together.” That’s one impetus.
Joel: It’s always been in the band of my mind too. Dad played on Three and guested on a few other records, a song or two here and there over the years. And we’ve been doing shows together periodically, back to about 2005. After La De Da came out we did a short tour in Southern Ontario; that was the first time we did some acoustic stuff together. So there is a history of it there, but all of the material was mostly my stuff. And it felt like if we were going to continue to play together it would be nice to showcase what Dad does as well and the shared influences that we have and make a record that was more collaborative. Initially the idea was for my dad to make a record and I would just produce it or play on it. But it turned more into a record that really is the two of us. It’s kind of a folk rock record that merges our two worlds and brings out the folkier side of what I do, but still has some production from my pop and rock world. It was really about us continuing to play shows together and giving my dad a bigger role. He’s been writing songs for years, and he had a cassette of them, from which we picked a few to put on this record.

Who do you think was more excited about making the record?
Bill: Well, I’m pretty excited about it! For me it’s a pretty invigorating thing. The experience of being in the studio and the experience of being involved with the mixing. And now we’re involved with the process of translating it for a live performance.
Joel: I was excited to make it too. Part of the joy for me was that Dad was super excited about it. This felt like a different step where I could indulge my folkier side. My dad brings a deep-seated knowledge of the British folk genre, and a lot of my love for guitar playing comes from learning from him and his influences, which eventually became my influences. Whether that was Richard Thompson or Jimmy Page, Bert Jansch was a hero, and that is all stuff I’ve listened to. It was fun to push it that way. [READ MORE]