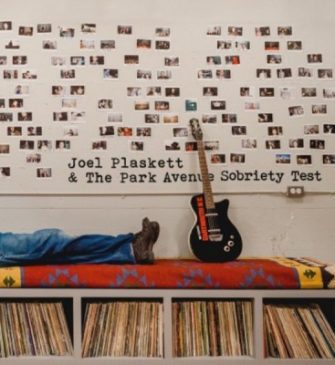 The Park Avenue Sobriety Test is Joel Plaskett’s fourth solo album (one of those, Three, was a triple—yes, you read that correctly—album,) though that’s a highly misleading number. There have been six albums billed as the Joel Plaskett Emergency, a few EPs and we won’t even mention his old band Thursh Hermit. On top of all this he’s been intimately involved in the production of several notable albums (including last year’s I Never Sang Before I Met You with Old Man Luedecke.) To call his output prodigous is an understatement. It’s also all almost universally good, and a high standard to live up to.

It turns out that huge smile Plaskett wears is indicative of a man who’s in exactly the place he wants to be and the Park Avenue Sobriety Test continue his solid track record with a collection of songs that look back on his in a self-reflective way. “Oh the good times we had / I remember the laughs / We could take any turn on a dime” the album’s opener begins “I don’t want to leave it behind.”

It’s no surprise that the rest of the album lives nicely up to the standard set by On a Dime. Alright Ok has the kind of quirky foot tapping beat behind it that Plaskett’s band is known for (it’s vaguely reminiscent of his classic Work Out Fine to my ear, and it sounds great.)

The albums’s got a nice natural live from the floor feeling too it—you can hear Plaskett talking to the staff at his New Scotland Yard studio several times through the record—and that lends a nice touch, particularly on Song For Jersey, a song which plays out as progression of short couplets of memories “Now I’ve got a little boy” he sings “and all my songs are silly / If I have a little boy I might name him Philly” midway through before following up with “God I miss John Candy / If I have a little girl I will name her Sandy.”

As an album, it’s hard to find fault with The Park Avenue Sobriety Test. On the spectrum from “Quiet Singer Songwriter” to “Rock & Roll Joel” the album lands squarely in the middle with enough upbeat material to satisfy your inner indie rocker interlaced with the kind of quieter moments that songs like Hard Times provide. This is one of the finest albums to cross my desk so far this year. I’m tempted to suggest that it’s desitined for the Polaris Prize shortlist but given my track record that might be seen as something of a jinx. Still, my fingers are crossed—Plaskett is one of the nicest personalities in Canadian music, and i would be nice to see the tall, perenially smiling and charming East coaster rewarded for a solid addition to a one of the most consistently enjoyable catalogues of material in the business.

The Park Avenue Sobriety Test is slated for release on March 17th and you can preroder it in all the usual places, including from Plaskett’s own web site. It was recorded at Plaskett’s New Scotland Yard studio which you can learn all about here. Plaskett is touring through eastern Canada now before heading west in May. The tour is currently skipping Vancouver, probably because he’s playing the Squamish Valley Music Festival in the summer.

by Skot Nelson, No Depression