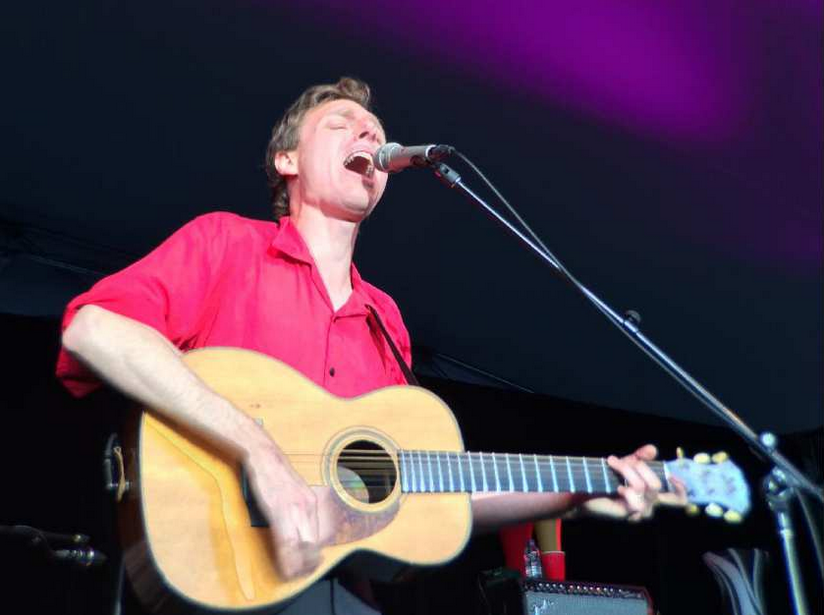 By Patrick Langston, The Ottawa Citizen

Just over a year ago, Joel Plaskett was fronting the jacketed and gowned National Arts Centre Orchestra and facing some 1,900 fans at a concert in Southam Hall. Friday night was a different story, with Plaskett and his own band playing Jazz Fest’s grassy, informal main stage before a more modest audience. But the boy from Dartmouth, N.S. seems to remain himself no matter what the circumstances.

Friday night, that meant rocking the crowd with the big opener A Million Dollars, shifting into the mixed desperation and hope of Broke and the wistful When I Close My Eyes from this year’s album The Park Avenue Sobriety Test, and performing the jagged Down at the Khyber with its convulsed electric guitar lead. Journeying down the endlessly baffling road that life can be, in other words, and doing it with the sincerity, gangly charm and touch of east coast accent that make Plaskett a perennial favourite on the tour circuit.

He also sang the musically disquieting Captains of Industry from the new album, prefacing the song with a mention of attending a climate change march. “This is for those trying to make the world a better place by pushing and making people accountable,” he said, reminding us that the protest song may have morphed since the 1960s but not disappeared.

Just about the time the cold he said he’d been battling really started to roughen his voice, the Emergency retired to let Plaskett perform solo. He played The Day We Hit the Coast, a song from his old band Thrush Hermit, and Stephen Foster’s 19th century classic Hard Times Come Again No More, a tune that seems to resonate no matter whether times are actually hard or good (played at a mid-tempo without the gravitas it needs, it’s not Plaskett’s best song).

As deadline approached, the band was moving from a rumbling version of the joyous Nowhere With You into the title track from The Park Avenue Sobriety Test. The crowd, as Plaskett can always count on, sang along on both.

Up and coming Vancouver tenor saxophonist Eli Bennett opened the evening with tunes from his debut album Breakthrough. Numbers included Let’s Roll, an extended journey of twist, turns and a rapid bounce down a musical washboard. Bennett and his three-piece outfit were subtle and laidback with a bit too much of the latter, at least for a live performance. Still, there’s no gainsaying this 25-year-old’s musical chops and intelligence.