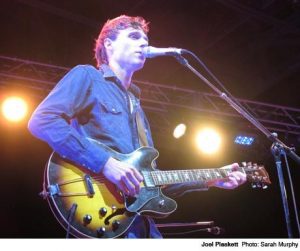 In his 20-year career, Joel Plaskett has never played the Olympic Hall. But for the native Haligonian, growing up in the city meant countless viewings at the ancient auditorium, including a rare East coast performance by Fugazi in the late ’90s. But a lot has changed since Plaskett first saw the pioneering punk band play the venue in 1998. Thankfully, the concert hall is no longer used primarily for bingo. And the 800-odd teenagers who once packed the club to witness the Washington, D.C. hardcore stalwarts have gracefully aged into adulthood — adopting receding hairlines and cabs to concerts, while holding onto their flannels and jeans. So it was fitting that on March 28, after nearly a year away from the city, Halifax’s 30-somethings would sell out the historic dancehall to catch a glimpse of Plaskett and the Emergency’s brand of nostalgic, throwback rock’n’roll.

Starting off the show were St. John’s, NL upstarts Repartee. Taking the stage in a fluttery, red-sequined dress, lead singer Meg Warren strutted the stage like a new age Stevie Nicks, blasting through a synth-heavy rendition of Fleetwood Mac’s “The Chain,” and filling the rafters with atmospheric hooks off the band’s recent self-titled debut. An odd pairing at first glance for the Dartmouth-transplanted rocker, the Newfoundlanders new wave tones offered an ideal appetizer for the heavy guitar rock shortly to come.

Plaskett and the Emergency walked onto the stage with the same reserved demeanour as Thrush Hermit had more than a decade ago. As his amplifiers buzzed to life, Plaskett took a moment to dedicate the night to local guitarist Jay Smith, who had suddenly passed away while on tour with Matt Mays earlier that day. As Plaskett’s usually assured voice began to tremble, the band took a second before launching into a rousing rendition of Three’s “Through & Through & Through,” converting the song’s Exile on Main Street-inspired sax solos and lackluster strumming into a carousing, riff-heavy scorcher fitting for the fallen Cape Bretoner. After the country-twang of Scrappy Happiness’s “North Star,” Plaskett began to dig deeper into his back catalogue, performing a triumphant rendition of La De Da standout “Natural Disaster,” complete with fuzzed-out guitar theatrics. Commenting on the band’s “recently released” new record, which had come out almost exactly a year to the day, the Emergency sped through versions of Scrappy Happiness ’90s revival “You’re Mine” and “Tough Love.”

As the rest of the band took a much-needed break, Plaskett picked up an acoustic guitar and began strumming through a 12-string rendition of “Face of the Earth,” lamenting the recent news that his beloved Northcliffe Park — the setting for Ashtray Rock’s protagonists and nearby location of Plaskett’s childhood home in Clayton Park — was set to be converted into a suburban wasteland. With that in mind, the unofficial fourth member of the Emergency, Joel’s father Bill, joined the stage to provide acoustic backups to hometown crowd-favourite “Love this Town.” After a ten-plus minute extended version of Truthfully, Truthfully classic “Work Out Fine,” Plaskett returned for a brief encore, catching his breath as he plugged his iPhone into the venue’s PA system. After promising not to be checking his email, Plaskett cued up Bobby Womack’s “Point of No Return” and began carelessly dancing around the stage while chugging a giant bottle of water. The fanciful Plaskett took things a step further, opting to play the CBC kids’ show Mamma Yamma’s version of “Fashionable People” over the original.

After a shirtless crowd surfer used Plaskett’s guitar pedals as a springboard into the crowd, the Emergency gained their composure and cranked out a caustic interpretation of career classic “Extraordinary” shortly before the house lights sprang on. As Plaskett and company bowed to the crowd’s ear-splitting adulations, Emergency drummer Dave Marsh held an issue of local alternative weekly The Coast’s Best of Music issue triumphantly in the air, which had named Plaskett “Best Songwriter” earlier in the day, and with good reason. As throngs of fans poured into the street, it was clear this was one of the standout performances of his career.