Hello Alternate Universe,
I was really excited today to find out that I’ve received two Juno nominations: Songwriter of the Year and one for Adult Alternative Album of the Year. I guess that means I’m an adult, a songwriter or the closest alternative. Off to the ECMAS in the morning with the Emergency to rock over Sydney. St. John’s was a classic last weekend.
Tempo is picking up, things are gonna get hectic. No complaints with the exception of the weird lip syncing of the I Believe song on the last night of the Olympics. I guess they didn’t Believe that it could be sung live on the air.
Joel 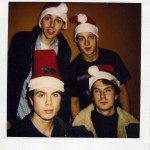