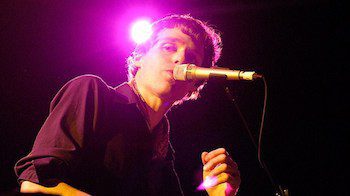 As noted on their website: “Every year, CBC Radio 3 awards a Lifetime Achievement Bucky to a true pioneer of the Canadian music scene — someone who has paved the way for artists to come. Joel Plaskett fits the bill perfectly: his incredible career has spanned more than 20 years and included 17 studio releases (between his first band, Thrush Hermit, his solo work, his recordings with the Emergency and other projects) but he shows no signs of slowing down. While he continues to tour and write new songs, Plaskett has also helped usher in a new cohort of Canadian talent, mentoring and producing new artists (he’s currently working with Mo Kenney and Colleen Brown on new releases) and most recently becoming a judge for CBC Music’s Song Quest.

There’s no doubt that Plaskett is a prolific national icon: he has been played on Radio 3 since its inception, and can count four Buckys among his long list of various awards and accolades — which now becomes five with this year’s Lifetime Achievement Award.”

In honour of Plaskett’s latest accomplishment, CBC Radio 3 is “taking a look at 15 of the best and most celebrated songs from his career so far, many of which have been played on Radio 3 time and time again (and boy, do we hope there are many, many more to come!). Check out each of the song picks in their gallery and listen to the playlist of all 15 tracks here: Plaskett primer: the top 15 Joel Plaskett songs

Thank you CBC Radio 3 for your incredible support for Joel’s career and congratulations to all the Bucky Award winners and nominees.