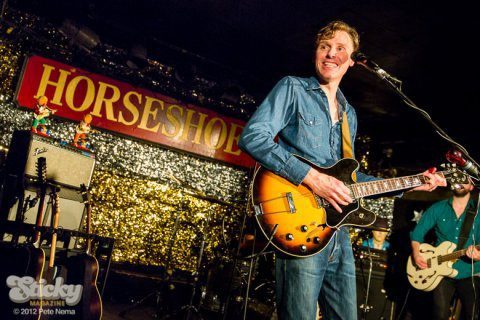 The Joel Plaskett Emergency took up residency at the Horseshoe Tavern for an epic five night house party in celebration of the venue’s 65th anniversary.

It is fitting that Joel Plaskett, one of Canada’s most iconic musicians, was chosen to help celebrate the 65th anniversary of this historic music venue. Both Plaskett and the Horseshoe are nationally respected and adored. Plaskett with his magnetic draw has attracted a group of devoted fans over the years, similar to how the venue has drawn in many other esteemed musicians.

The Horseshoe was filled with an energized group of Plaskett fans for Wednesday, the first of his five night residency. The relatively small venue offered the extremely passionate group an opportunity to get up close and personal with their idol. Plaskett specializes in nostalgic songs and has a sound that is innately Canadian. It is this feeling of familiarity, which accompanies his witty song lyrics and personable live performance that seems to connect well with the audience. Even if you didn’t necessarily know all the lyrics, you would have found yourself dancing and singing with strangers, and making new friends along the way.

Clad in his trademark Canadian tuxedo, Plaskett shimmied and foot shuffled across the stage throughout the set, keeping the crowd fully engaged. The energized audience warmed the venue with their love and enthusiasm for Plaskett and his music. By the second song, Plaskett was already commenting on the heat radiating throughout the venue, but that didn’t stop him from carrying on at full blast.

Plaskett played songs from across his discography, with most attention paid to Truthfully, Truthfully, Three, and Scrappy Happiness. Each album’s different qualities and characteristics created a dynamic live performance. “The Red Light” and “Extraordinary” from Truthfully, Truthfully brought the strong pop melodies while “Through & Through & Through” and “You Let me Down” from Three brought the hooks and catchy choruses. His latest album, Scrappy Happiness, seems to be a compilation of many personalities with a mixture of sincere ballads and carefree sing-and-dance-a-longs, with a rock ‘n’ roll energy. “Harbour Boys” filled the venue with passionate “la la las” from the crowd while “You’re Mine” and “Lightning Bolt” triggered cheers and a lot of dancing. However, it was songs such as “Before You Leave” and “On the Rail”, which are rarely played live, that received the most attention. The crowd proved their loyalty with loud cheers for both.

For his encore Plaskett plugged in his iPod saying, “this is the point of the night when I start to get sick of myself,” and introduced the audience to Bobby Womack’s “Point of No Return.” He then kept his iPod plugged in to perform a duet and dance with a recorded version of himself singing the CBC kids version of “Fashionable People”. This included plenty of quirky dance moves and animated facial expressions, seeming to indicate mock surprise at his recorded voice and silly lyrics.

Joel Plaskett’s quirkiness was on full display throughout the entire two hour set with his dance moves, stories, the now well known pair of dancing guitar monkeys, and a life-sized bust of Wayne Newton. It was this, and of course his witty conversational lyrics, that connected with the audience and kept smiles on their face throughout the night. Plaskett is an endearing performer and it is hard to not be charmed by his charisma and get caught up in the excitement of the crowd. It is also hard to deny the influence of his rhyme and wit combined with the power of a great sing-a-long. Similar to the Horseshoe, his live performances reach a legendary level that will be talked about and respected for years.

You’re Mine
Deny, Deny, Deny
North Star
When I Have My Vision
Through, Through, Through
There’s Love in the Air
The Red Light
A Million Dollars
Harbour Boys
On the Rail
You Let Me Down
Before You Leave
Lightning Bolt
She Mad a Wreck Outta Me
Work Out Fine
Nowhere with You
Extraordinary

[Ed. Note: See Lee’s take on all five nights of Joel Plaskett below.]

About a dozen or so die-hard fans made it out to all five nights of the Joel Plaskett Emergency (or, at least, about a dozen or so who were happy to let it be known). Many more purchased multiple nights. Knowing this, Joel made a concerted effort to mix up the set list from night to night. Though crowd favourites old and new (“Extraordinary” and “Lightning Bolt” stand out) made it onto the set list every night, there were other favourites that made it onto a few nights’ (such as “Snowed In” and “True Patriot Love”) while yet others (“Light of the Moon” and “Heartless Heartless Heartless”, for instance) made only one special appearance. The set list of each night was heavily influenced by both the opening act and special guests.

The opening acts offered a glimpse into the range of projects that Joel gets involved in. While the first two nights featured the off-the-wall one-man-show of Steve Poltz, each of the remaining nights put the spotlight on younger, up-and-coming talent. The veterans were Two Hours Traffic, whereas the current project between Molly Rankin and Alec O’Hanley (previously of Two Hours Traffic) represented the opposite end of the scale, being a newly minted band. Between the two was Mo Kenney, shaking things up on Saturday night. Rather than a straight-up opening act followed by the Emergency, Saturday’s show started off with Mo Kenney on her own, supplemented by Joel Plaskett after a few songs, and ending with a few numbers with the full band, as Dave Marsh and Chris Pennell joined them on-stage. After a short break, the Emergency was back up for one of the most energetic and fun shows of 2012.

Highlights of the five nights: Friday night’s show featuring Pete Elkas for the second half of the set and Miranda Mulholland on fiddle for several songs; Saturday night’s show had pure energy driven by the most keen fans (Saturday night sold out first); and the unpredictable appearance of Max Kerman (of Arkells) as well as Ian McGettigan and Rob Benvie (of Thrush Hermit) on Thursday night. Most impressive of all was the incredible energy and enthusiasm of the band playing all five nights. The running theme from night to night was Joel leading the crowd in gospel-like singing during “Work Out Fine”, drawing from the lyric “make it to the church on time”. The church of the Horseshoe Tavern, that is. His mock exhausted collapse at the end of Sunday night capped off the metaphor for the five night run: Joel gave everything he’s got to get us all to the church on time.