Joel Plaskett Emergency at the Regent 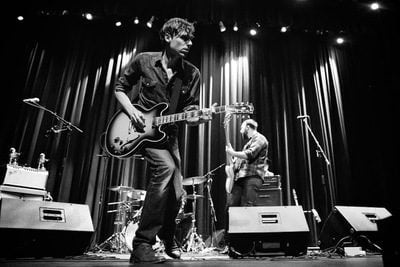 Joel Plaskett’s show at the Regent Theatre Friday night was more like a high school reunion than a concert. With minimal lights, minimal set-up and a tall curtained backdrop the soft-seater venue had a school auditorium vibe; kids in the seats rearing to rock, teachers at the back keeping all in check.

About halfway through the night during Nowhere With You, (what would be considered the hit!!) the kids broke free and stormed to the front of the stage… one or two managed to access the stage itself.

Plaskett has been playing the rock and the roll for almost twenty years but he still plays like an exhuberant teenager . He is a man who enjoys his job. He is touring with the Emergency, Dave Marsh on drums, Chris Pennell on bass. Just the three, with a short stack of amps, with a couple of monkey toys and a Wayne Newton head on top.

While visually the band looked like a high school act the act itself was far removed from those stuttering early days of first gig nerves. Plaskett’s drew from his two decades deep back catalogue as well as material from his current album Scrappy Happiness.

Beginning with Snowed In, the Emergency rocked and rolled and reeled through tracks that showcased their roots in folk as well as in pub rock and power pop.

A solo acoustic set by Plaskett allowed him to rest his voice and flex his chops. Mo Kenney, who is opening the shows, joined him for a couple of songs, hers and his.

Plaskett has played Oshawa several times in several venues over the years. His shows have an indelible mark here as I have written in a column already. On this night many in the audience were musicians he has influenced over the years and at those older shows. A couple of generations of movers and shakers in this area all met up again in the aisles and the bar of course. Generations who have booked Joel, interviewed him, written about him, played with him and rocked his records at home. Most excitingly such notable new musicians like Kyle Wilson and members of the Stone Sparrows and Viva Mars were there, grooving, hearing, and learning.