Noise Floor is a Boston-based music blog with a focus on live reviews, photos, news and commentary on everything interesting in the world of compelling people making compelling sounds. 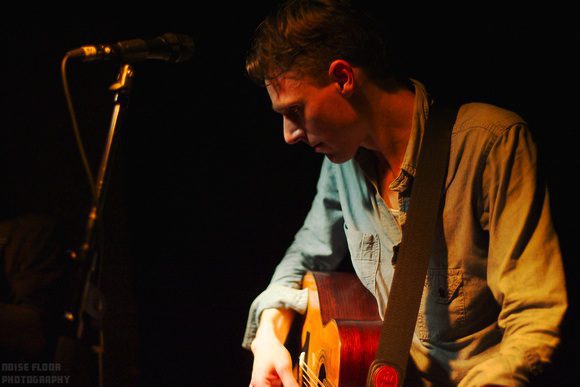 Plaskett’s musical resume is a rather impressive one: Polaris Music Prize nominee, Juno Award winner, primary songwriter of Canadian alt-rock band Thrush Hermit and leader of the Joel Plaskett Emergency, not to mention a triple-album (!) and several more releases under his own name. Plaskett seems a minor celebrity in the music scene of his native Canada, but remains curiously overlooked here in the states. Even in a room as small as O’Brien’s, however, Plaskett’s charm and natural showmanship were undiminished.

Plaskett’s early days in Thrush Hermit saw him exploring Big Star-indebted power-pop, and he’s retained an ear for catchy melodies and big choruses throughout his subsequent projects. This particular evening featured largely acoustic instrumentation, stripping the typical power from the pop. It was no detriment to the songs, though. Plaskett alternated between tenor and six-string acoustic guitars, which lent many of the songs an extra folksy feel befitting of the intimate setting of the show. For some of the more upbeat numbers, guitarist and backing vocalist Peter Elkas joined in, running a Gibson acoustic through a pedal or two and adding a bit of classic rock muscle to the songs.

Plaskett is a particularly earnest type of songwriter and performer. He had an immediate rapport with the audience that was evident the second he stepped onto the stage. With a genuinely friendly demeanor, a conversational sense of crowd interaction and the rare sort of anecdotal stage banter that was nearly as entertaining as the music itself, Plaskett proved himself an undeniable showman. He had the packed-in crowd squarely in the palm of his hand from start to finish. His songs largely followed suit from his down-to-earth stage presence, telling love stories, tales of life on the touring circuit, nostalgic recollections of Nova Scotian towns and other humble narratives. His lyrics felt human and relatable without veering toward the maudlin.

The thread of Canadian heritage ran through both the songs and stage banter all night, with Plaskett receiving zealous cheers at every mention of his hometown of Halifax or any of its resident establishments. The diehard fans in the room clearly expanded beyond the expatriates though. A chorus of enthusiastic voices sang along to songs both new and old. Plaskett, smiling all the while, was clearly having just as much fun as his fans.

Local acts Cause a Rockslide and World’s Quietest band rounded out the bill. World’s Quietest Band, an aptly named duo who performed from the center of the room, sans amplifiers or microphones, were on first. With a set of alternately humorous and poignant songs, and a series of performance antics that kept even the unfamiliar audience members engaged, they put on a memorable show. Cause a Rockslide, aka singer/songwriter Tim Cheplick, was unfortunately difficult to hear over the talkative crowd. What could be made out over the din sounded good though, and Cheplick admirably soldiered on through a performance of his latest album, The Daily Dose.