Yep, home, at least for a few days. Good times in England and Ireland. Dublin got us rolling. After arriving at 7 am via ferry (damn you ash cloud!) we checked in then headed straight to RTE 1 for an acoustic performance and interview with Myles Dungan. That night we rolled out our first show at the upstairs of Whelan’s. Some rowdy Canadians mingled with the locals and the games had begun. The next night a great show at Vicar Street opening for Jerry Fish and the Mudbug Club. Jerry’s show makes grown men hug each other and strangers kiss. In inspirational event for sure and I felt lucky to be a part of it. After that we were off to Galway for an afternoon show at Nimmos with the breeze blowing through the cafe and pints of cider being poured. That night found me playing Light of the Moon and lakes of Ponchartrain at the local Gaelic club with Una the harpist. Peter captured the good times on his iphone which was later stolen outside The Crowbar in London by some skilled evil pickpocket who better be watching those videos and realizing that Peter Elkas has a lot more friends than he does.
The Borderline in London was full and rocking as we closed the night with the Madonna tune of the same name.

Brighton was breezy, beautiful and fun until a a whopping cold knocked me out and left me in a hotel room for two days watching Diehard, The Breakfast Club and most importantly, Walter Matthau as Charlie Varrick. Thanks to Shane and the Canadian Blast crew for hosting some fun shows with our friends Zeus, Jason Collett, Woodpigeon, Rich Aucoin and more.

Liverpool was… eventful. First we checked into a hotel that had a condom hanging from the fire alarm above the bed. We switched to another one that just smelled sweaty so it seemed like an improvement. Apparently monitors are not something to be taken for granted and the lack of them at Hannah’s made for a tough show. Twenty five minutes into what was supposed to be 30 minute set, the stage manager kindly let me know that I had “one minute left”. We stood there for a minute, wondering what song to play, then packed up and retired to the Premier Inn bar to drown our tired vocal chords. I shouldn’t have sent Steve (my soundman) home earlier that week. The next night at MOJO found us patching our own stage only to have the first two songs marred by constant feedback that the local tech couldn’t control. We quickly abandoned the idea of amplification in favour of an acoustic performance to a handful people who moved up close the stage. Peter and I played about four songs before being told by the stage manager that our time was up. Ignoring this information we rocked one more for the small but enthusiastic crowd. We came to play, not to get our 30 minute set cut down to 25. The Sound City Music festival needs to invest in the idea of Sound in their City or change it’s name to something more appropriate…I have a few suggestions I’ll keep to myself. Not all was lost in Liverpool. We met some cool locals, ate some good food, went to the giant cathedral, found a breezy outdoor cafe and got to hang out with our friends Sanjay and Paul. I also found out about this band called The Beatles who are making a bit of a splash.

So… home. Happy and sad. Happy for obvious reasons. Sad because while I was traveling the world’s most memorable cat, White Fang, passed away, moving on up to the great sheepskin blanket in the sky. Adopted on Sept. 11, 2001. Stray in the back of our Brenton Street apartment, Fang, was originally named Little Queenie (after the Chuck Berry song) for about a month. Many band-aids and scars later, we realized that name wasn’t appropriate and White Fang she became. Once her ears came off to cancer she no longer had to abide by the rules of Cat-dom and all bets were off. Changing locations every month or so, nomadic Fang was both a complete mystery and true constant in a world of uncertainties. You could never predict where she’d set up shop next, but, you could know without a doubt, that for 23 of the day’s 24 hours, she’d be sawing logs. Low on energy for her entire life, partly deaf, and always seriously off balance you could never be sure if Fang knew who you were. It didn’t matter, we knew who she was. The Sweet White Fang. She hung on as long as she could but it was time for her to move onto greener pastures.. or whiter blankets…or hotter radiators… or more chewed up cardboard boxes… or longer laps… or simply to a place where she had ears again. I loved that cat. 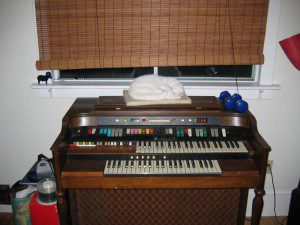 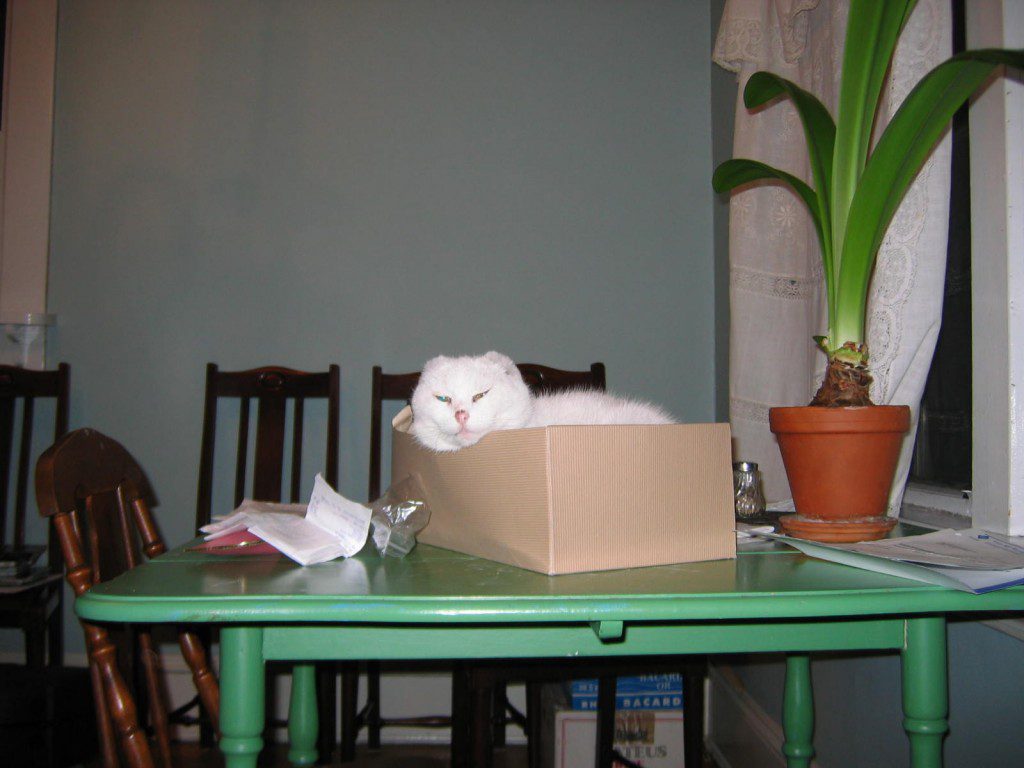