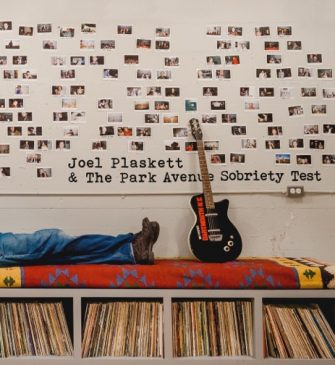 At a certain point in every professional musician’s career, a dramatic re-thinking of intent seems necessary, and the results can either totally sink them or produce some of the best and most adventurous music in their songbook. That moment is the one when the drive in their minds ceases to be about simply making a new record and becomes about making a record “which sounds like this.” “This” could really be anything (it could be more ambitious, or it could be more stripped down, or it could take less time to make), but that thing is very important; it is the difference between simply creating and creating music with a vision and is idea-based – it isn’t just reactionary. Some artists begin this arc early (Mark Oliver Everett and Wayne Coyne both began creating music this way less than ten years into their careers while Green Day got there much later, for example), but all musicians get there, eventually. Joel Plaskett boarded this point in his career with his big-huge purge release Three in 2009 and sort of fumbled (but confidently so) with his muse on Scrappy Happiness, but now he has both focused and refined his approach with Park Avenue Sobriety Test; this time, Plaskett has pulled together collaborators from his myriad projects (including The Emergency, his solo band and collaborators like Mo Kenney too) and asked them to just have some fun with him as the tape rolls for each song (that’s right – a lot of P.A.S.T. was recorded live off the floor). The energy and excitement in the recording is undeniable, and listeners will have no trouble getting caught in the album’s current at all but, even better, some of these songs represent the next evolutionary step in Plaskett’s work too; there is still youth and innocence in Plaskett’s voice and vocals, but also some aged experience too. That isn’t to say Plaskett spontaneously got old in the time between Scrappy Happiness and P.A.S.T., just that he isn’t trying to be the man who wrote “Written All Over Me” anymore; that would be fake, but Plaskett is as genuine as ever here.

After “Illegitimate Blues” warms listeners up a bit with some solo acoustic insecurity (lines like “Pressure’s on, pressure’s on/ It’s time to make up my mind” illustrate when Plaskett is coming from perfectly), Plaskett and his band load up and fire off some fine Maritime Country Folk in the form of “On A Dime.” There, Plaskett is in quintessential form as he recounts times gone by and warm memories missed, but the difference is that the song comes on as strong as it does sweet. Even though the folk which pushes “On A Dime” along is sweetly flavored, it’s crisp and has some Emergency-fueled muscle too. The same is true of the song which follows it, “Alright/OK” – the organ and clavinet color it and give it a funky flavor – and that energy coupled with the obviously new angle taken generates some great sparks of electricity. Here, listeners’ eyes will begin to sparkle just as Plaskett’s are and, even though the ground is fairly untested, the singer walks it well; there’s even some swagger in the pre-choruses.

The success of “Alright/OK” fuels the movements that the rest of the album makes, but it does not inform them, Plaskett bravely pushes in other directions. “When I Close My Eyes,” for example, gives listeners some fine, heart-on-its-sleeve songwriting (the lyric “This is my heart and it’s a grenade” grabbed this writer’s and wrenched it, and the talk of walking on cliches sealed my adoration for it) but then turns to some solid hard feelings rock smoothly in “Credits Roll” before leveling out for some sweet romance with the triad of “Captains Of Industry,” “For Your Consideration” and “Hard Times.” While it’s true that none of this tracks (and, really, none of the others on the album either) have the power levels of songs like “Nowhere With You” or “Written All Over Me,” the passion in them makes its absence very easy to forget. The passion is the power on Joel Plaskett & The Park Avenue Sobriety Test, and it’s as strong as any bravado-touched rocker Plaskett has ever done before; that evolution is great and welcome because it offers a possible avenue for the singer to enter now that he no longer seems interested in rocking the pants off of fans. For longtime supporters, such a turn is really exciting.

As The Park Avenue Sobriety Test‘s title track wryly shows listeners out through the back door with talk of (sort of) good times, listeners will find themselves smiling even though the song isn’t really intended to inspire good feelings. Why? Because this perfectly imperfect ending is such a great change from normal for Plaskett; usually, all the problems Plaskett’s working with/through in any of his albums seem sewn up in the end, but that’s not so here. Likewise, there aren’t really any great one-liner songs (like “Nowhere With You”) on P.A.S.T., the album really just features a set of really good songs which don’t need such a hook to get over, they’re just good. That proves to be the point on Joel Plaskett & The Park Avenue Sobriety Test: no song here is the typical sort for Plaskett, but the set of them together is great. In that way, the album plays against type and still wins.