Howdy Folks,
Tonight is the last show of the tour with the Barenaked Ladies. It’s been a blast and it was swell of them to invite me along. Peter Elkas has been accompanying me and we’ve been rocking our best Everly Bros shirts. We’re off to Ireland and the UK on Tuesday for more shows in support of a single disc version of Three (called Three to One) that will be out over there very soon and distributed through ADA. All this traveling has me waking up as late as I can and trying to keep my cell phone off. I am truly thrilled to have won the Juno for “Adult Alternative Record”. Unfortunately I couldn’t be there to accept but when I found out I was in a Vietnamese restaurant with Pete in London, Ontario. He snapped this photo and then we had a killer meal. My birthday was the next day. Thanks to McGetts for the surprise party. 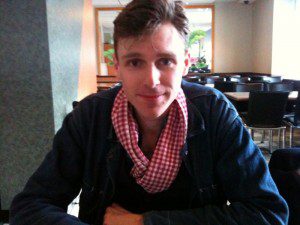 Check out Steve Poltz when he hits the Maritimes in early mid May. HIs record Dreamhouse is coming out on New Scotland Records (on cd and VINYL) on May 4th. Rebecca Kraatz did the smoking artwork and I produced it and played bass and drums on it.
Looking forward to returning to Halifax later in May, then off to Ontario to produce a few songs for the immensely talented Sarah Slean.

Lots going on and I’m looking forward to getting back to some rock and roll with the Emergency as the summer nears. For whom the bell tolls, time marches on!
Jp

PS- Peter hung out with the Spinners last night in Montreal and I’m jealous.