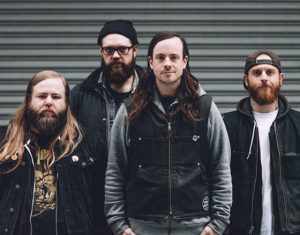 We’re a few weeks away from the start of Cancer Bats’ “The Good Ol Canadian Rip” tour, but the metal-minded act are getting us pumped for the trip with a patriotic cover. You can hear their amped-up take on East Coast icon Joel Plaskett’s “Through & Through & Through” online now.

Though the original was anthemic in its own right, the CanCon cover lands in a most fist-pumping way. In addition to bringing Plaskett’s harmonies deep in the red, the melody itself has been spiked with a series of pinch squeals, gravelly cries and drum-crushing beats. Also of note, the track was recorded with Plaskett at his New Scotland Yard recording facility in Dartmouth.

The track was premiered yesterday (November 8) via The Strombo Show, with the band appearing on-air to explain why they covered the Thrush Hermit member’s solo song.

“We’re all huge Joel Plaskett fans from Thrush Hermit to his Emergency jams and solo stuff. Easily one of the best songwriters in Canada,” Cancer Bats’ Liam Cormier explained. “We chose ‘Through & Through & Through’ because it’s such a catchy banger of a tune and we figured we could make a rad gnarly version. The best part was working with Joel and how pumped he was on the cover and how much fun he was to record with. Best dude! Hopefully we can head out to New Scotland Yard again!”

You can hear the reinterpreted tune here on Exclaim!.