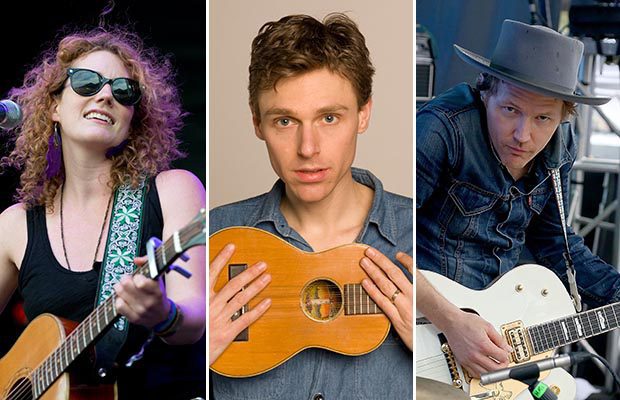 Where: Heritage Amphitheatre in Hawrelak Park

Tickets: available at store.sixshooterrecords.com or the gates

When her pal, Luke Doucet, asked her to join an All-Stars band for Interstellar Rodeo, Edwards jumped at the chance.

Their set, also featuring Joel Plaskett, is her first public appearance of 2015 — and only her second since she put her musical career on hold and opened a café, Quitters, in Stittsville, Ont. last year.

“I get emails semi-frequently with offers (to play) and they just don’t appeal to me,” she says. “But this one was obviously super special — I know Joel, I know Luke, I love both those people and it feels like a safe place. There’s part of me that is unapologetically happy that I’m not doing music full-time right now, so the few things I do are wonderfully liberating.”

As part of the All-Stars, each one of these soon-to-be Canadian legends will play a smattering of his or her tunes, backed by their colleagues and a rhythm section. “This is going to be fun,” says Plaskett. “I love Kathleen and Luke so much as people and musicians, it was a no-brainer. And bassist John Dinsmore plays with Luke and Kathleen, and Dave Marsh is my drummer, so it’s going to be a supergroup.”

In other words, this ain’t no off-the-cuff songwriters’ circle. Between them, Edwards, Doucet and Plaskett have released more than 20-plus albums and EPs, so they’ve been texting and emailing each other about song selections for weeks. On Saturday, they’ll rehearse their choices at a secret location in Edmonton — a day before their set at the festival.

“I wanted it to be a band with other singer-songwriters — but playing rock ‘n’ roll,” says Doucet, who was tasked with assembling the All-Stars. “Honestly, the first people I thought of was Kathleen and Joel. I thought of a few others — like Chris Murphy from Sloan, Ron Sexsmith, there’s all kinds of people that would’ve been really cool. But one of the things that Kathleen, Joel and I have in common is that we’ve all played folk music, country music and rock ‘n’ roll, so we’ll be able to draw from some of the same places. I knew there was a distinct possibility Kathleen was going to say, ‘Go f— yourself, I’m not playing music anymore.’ But I’m obviously super-pleased she’s into it!”

This year’s All-Stars were inspired by Interstellar Rodeo’s previous supergroup, featuring Blue Rodeo’s Jim Cuddy, Danny Michel and Quique Escamilla, in 2013. “We wanted to bring it back,” says festival producer Shauna de Cartier. “I approached Luke first and asked him to help me curate and co-ordinate it. When you do something like this, you need an anchor and Luke is such a great musician.”

We talked to this year’s All-Stars, unofficially known as JKL (Joel, Kathleen, Luke), about their friendship, the songs they should play for Sunday’s one-of-a-kind set, and the future:

All-Star pedigree: He’s best known as one of the musicians behind Whitehorse, a smouldering folk-pop duo co-starring his wife, Melissa McClelland; and as Sarah McLachlan’s guitarist. He also has six solo albums under his belt — from 2001’s Aloha, Manitoba to 2010’s Steel City Trawler.

Previous collaborations: “Back in the day, Kathleen and I did some shows for a songwriters’ series at the Rivoli in Toronto. I also played guitar for her on a couple of shows on the west coast, and we worked in the studio for a week on a record that will probably never see the light of a day.”

Joel’s joints: “I’m such a fan of his album, Down at the Khyber, I want to play all those songs, but that’s not really fair. He’s released a bunch of records in the last 15 years.”

Luke’s licks: “I haven’t made a solo record in a long time. I’ve released three Whitehorse records since then and I feel it’s kinda offside to draw from the Whitehorse catalogue because Melissa won’t be there and we won’t do the songs justice without her. Whenever I play music by myself, I tend to lean on (my 2008 album), Blood’s Too Rich, only because I’ve played those songs the most and the arrangements are simple. They’re conducive to rockin’ out. Joel’s such a great guitar player, I’m really looking forward to the two of us bashing out those hooks together. Joel’s been such an inspiration.”

Potential for a JKL-penned tune: “I would love to do it, I think it would be a blast, but I don’t think the time is going to allow for it.”

Future possibilities for the All-Stars: “Ulcers. Maybe. We’ll see how we get along.”

All-Star pedigree: The Ottawa-area songstress is one of Canada’s most acclaimed exports, with seven Juno nominations, multiple performances on Late Show with David Letterman, and rave reviews around the world. She has released an EP, Building 55, and four albums — from 2003’s Failer to 2012’s Voyageur.

Previous collaborations: “When Joel did his record, La De Da, I was touring the U.S. and I got him to open for me,” says Edwards. “It was just me, him and Jim Bryson. Itt was incredible.

“Later on, Luke played guitar for me during a couple of shows, then we both worked on some stuff with Bryan Adams. We went into the studio for a week, but it just didn’t materialize.”

Joel’s joints: “I love Joel, I love his songs, I’m a fan of pretty much everything he does — I know he just produced Mo Kenny’s record and it’s super special. I listen to Joel’s music all the time, so I know all of his songs. He has a song called Heartless, Heartless, Heartless — I love it so much, I want to sing it with him. I love the whole album, Three. To me, it’s as good as (The Band’s) Music From the Big Pink.”

Luke’s licks: “I think his Broken One is a brilliant song — ‘You’ve got to have a heart to have a broken one.’ All of his songs have amazing harmony parts that I would love to sing with him.”

Kathleen’s cuts: “When Colin (Cripps) left my band, Luke filled in and absolutely killed the guitar solo on my song, Goodnight California from Asking For Flowers. I was so gobsmacked the whole time, so I would definitely love to let Luke off his leash and watch him go. You don’t know what it’s like to stand next to Luke onstage when you’re the singer and he’s the guitar player — you think you’re dreaming.”

Future possibilities for the All-Stars: “I’ve actually thought about working with Joel on my next record. I love his esthetic. He’s really loose, you can tell he shoots from the hip when he’s in the studio, but he’s not overcalculated. It’s raw but it sounds great.”

All-Star pedigree: Plaskett got his start in the ’90s alt-rock band, Thrush Hermit, and recently issued his fourth solo album, The Park Avenue Sobriety Test. The Nova Scotia treasure also has six releases as Joel Plaskett Emergency, from 2001’s Down at the Khyber to 2012’s Scrappy Happiness.

Previous collaborations: “I opened for Kathleen in the U.K. and in the States and we’ve done a few shows together in Canada,” says Plaskett. “We sang a song or two on some of those shows — she played on Happen Now with me — about seven or eight years ago. I haven’t seen Kathleen for a long time, so when I heard she was doing this, I thought: ‘This is cool.’ More things like this should happen in the world.”

Kathleen’s cuts: “I really like A Soft Place to Land from Kathleen’s last record, Failer. It’s a beautiful tune and it’s one that leaps out to me, but I don’t even know if there’s a place for me on it. We’ll see what she wants to bring to the table.”

Luke’s licks: “He sent me a list of five of his songs. I know a bunch of his solo catalogue, but I don’t know all of it intimately. Same goes for Kathleen. Hopefully, they’ll say the same about me. I don’t know anybody’s catalogue completely other than Led Zeppelin’s. But there’s one of Luke’s songs, Cleveland, which I’m hoping will make it into the set.

“His songs are all fun guitar songs — but that will also be a challenge. I play lead guitar but now I’ll be onstage with Luke Doucet. He’s so good. It’ll be nice to have such a hot guitar player on stage. I figure when he starts running circles around me, I’ll just start dancing.”

Joel’s joints: “A lot of tunes from my new record are close to my heart but I know Luke really likes one of my old ones, Down at the Khyber. If there’s one song he and Kathleen are excited about, I’ll just dust it off and go.”

Potential for a JKL-penned tune: “I’m game for anything, or maybe we can find a cover we can all dig into.”

Future possibilities for the All-Stars: “That would be fun. If all it is is the three of us getting together and having fun in the summer, that’s great. They’re people I really like and have respect for as musicians.”