Joel Plaskett Emergency and Always at The Horseshoe in Toronto 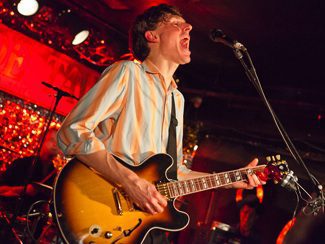 A little piece of trivia that surprised even me when I learned it (and is really of no relevance to anything save this opening paragraph) – save for his two appearances at the Polaris Prize galas in 2007 and 2009, I’d never seen I’d never seen Joel Plaskett live. And it certainly hasn’t been for lack of opportunity – while it’s highly unlikely Plaskett will ever uproot himself from his beloved Halifax, he’s played Toronto enough to claim honourary residency.

No, it’s been partially deliberate on account of the fact that while I like Plaskett’s stuff, I’m in the seemingly minuscule group that just likes it and doesn’t love it. I’ve heard a number of – but not all – of his records and respect the work ethic that’s made him one of this country’s most beloved artists (at least in the demographic that I run with), but the breadth of his catalog and the passion of his fanbase has made the prospect of finally going to one of his shows a daunting one. Would I know (m)any songs? Would I enjoy it? If I didn’t and said so, would his street team put a hit out on me? Real concerns, people. But with the man setting up shop at The Horseshoe for five straight nights in honour of the bar’s 65th birthday and the fact that I really quite like his latest effort, this year’s Scrappy Happiness, I decided it was finally time. But of course I waited until the very last show – partly because it was an early show being a Sunday night, and partly because Always was opening.

I’d seen them a few weeks ago supporting The Joy Formidable, but while I went into that show thinking, “Always?” on account of not knowing who they were, I went into this one thinking, “Always!” on account of knowing who they were and liking what they did. Notes from that past show mostly still applied this time out, but it’s worth noting that even though they were a rhythm section-less three-piece this time out, the songs didn’t seem to suffer at all for it. The sequencer pinch-hitting in laying down backing tracks kept in the spirit and sound of their janglesome old-school indie-pop aesthetic just fine, and the simple beats kept things sprightly. The demos I originally linked to in that last review are now hidden from prying ears – apparently they weren’t for public consumption – but hopefully something finished will be revealed soon and y’all can hear – and decide – for yourselves.

Even though I freely admit to not having heard all of Plaskett’s oeuvre, I know that you don’t really have to have to know what he’s about. From grunge-pop beginnings with Thrush Hermit, he’s spent two decades establishing himself as a sort of Canuck Springsteen, specializing in The Boss’ nostalgic anthems of youth with a certain Maritime bent and intrinsically Canadian reliability – kind of an arena rock/kitchen party hybrid. You don’t have to listen long to note his habit of repeating references to people and places, but rather than sounding repetitive, it helps create and define the world his songs and their loose autobiographical narrative exist within. He believes in the purity of the rhyme and riff – particularly of the ’70s rock vintage – and the power of the “la la la” singalong. It’s not a complicated formula, but that’s what makes it so difficult to get right. And as Plaskett showed me, he’s gotten it right and makes it look easy.

Though his voice did show some of the strain of the past nights’ performances – and their respective afterparties, I’m sure – Plaskett’s energy was unflagging for the two hours he was up there. After all, it was their last show of the year; if ever there was a time to leave it all on the stage, this was it. With a couple of animatronic monkey toys adding a little Disneyworld/Chuck-E-Cheese flavour to the evening, Plaskett proved a terrific and engaging performer. Whether the acoustic troubadour crooning sensitively or the electrified preacher ripping guitar solos – with plenty of entertaining banter for either guise – he was every bit the showman without getting overly showy and selling the flair with his total earnestness.

Not being intimately familiar with the catalog proved not to be an issue, either, as there were enough tunes I knew and liked to keep me fully engaged and, for reasons noted above, the ones I didn’t were hardly difficult to get into and enjoy – though being in a big crowd who seemed to know every word to everything helped with that. And you need that kind of fanbase if you’re going to encore with an iPod-assisted musical history lesson as a lead-in to a partially-lip synced dance routine, as he did for “Fashionable People”, or turn a jam into a freestyle not-rap tribute with 65-beat count-up to mark The Horseshoe’s anniversary. As first-time Joel Plaskett shows goes, I think I could have done much, much worse.