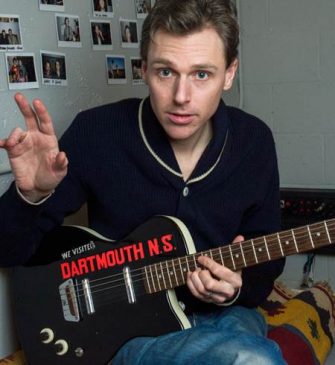 It boils down to a good song so as a producer I’m always encouraging people to cross the t’s on their lyrics and melodies, making sure every one word counts. Good production should lift a great song to greater heights and occasionally surprise you.

There’s something extra cool about these coast-meets-coast shows—having pieces of Canada’s East visit us out here in the West. Over the past couple of decades, Joel Plaskett has been a major figure of both the local Halifax scene and of our national musical identity. Emerging in the early 90s as a member of the alternative rock (but not quite post-grunge!) phenomenon Thrush Hermit, his latest album, ‘Park Avenue Sobriety Test’, was released just about a month and a half ago. Deftly balancing moments of levity and gravity, and expertly self-produced, it also has the quality of a warm and social open session. It features numerous guest musicians, one of whom is his opening act for this current tour: Mo Kenney. Joel produced Mo’s first two albums, and it’s going to be amazing to see them both on the same night: Thursday May 7th, at Alix Goolden Hall. A few tickets are still available here.

Joel was kind enough to answer a few quick questions for us! (And if you missed our interview with Mo, definitely check that out, too.)

‘Park Avenue Sobriety Test’ is such an interesting title. The first thing you might think of, if you didn’t live in Halifax, is the elite Park Avenue in New York, but it actually refers to hair pin turns on Park Avenue in Dartmouth—ones that have proved difficult for people to handle after a few drinks, which is kind of surprising juxtaposition. And the lyrics of the track really seem to be focussed on disillusionment. So even though it’s quite a funny/quirky title, it seems like there’s some fairly broad social commentary there.

The Park Avenue Sobriety test was a quip my neighbour, Roy, made after I told him about the bent up guardrail on Park Ave. The descriptive title reminded me of The Kinks “Village Green Preservation Society”. I noted that it was a great name for a song and ran with it a couple months later. It’s a singalong about how the world can conspire against you but at the end of the day what you really have to deal with is yourself. The last line of the last verse sums it up, “When you’re one of a kind you can’t get in the Ark, so zip up your jacket and go home.”

What are some of your favourite lyrics from other people’s songs? Either entire songs, or little phrases and snippets…

Here’s a few that come to mind:

“Mary loves the Grouse, hides the bottles round the house, watches chat shows and the soaps, broken hearted but she copes” – Damien Dempsey’s “Sing All Our Cares Away”

“If I had a nickel for every dime you had, I’d have half of your money, talk about not half bad, more like 10 times as good…” Todd Snider’s “In Between Jobs”

“With a growing sense of dread, and a hammer in my head, fully clothed upon the bed” – Nick Lowe “Lately I’ve Let Things Slide”

“Drive your bargains, push your papers, win your medals, fuck your strangers, don’t it leave you on the empty side” – Joni Mitchell “Woman of Heart and Mind”

“I’m a lightweight, waiting on a Skype Date” – Shotgun Jimmie

“The Twelfth of Never” written by Jerry Levinson and Paul Francis Webber. Nina Simone’s live version is the one that matters.

English folk music, via your Dad, is one of your major influences, right? Would you say your UK tours have had a big impact on your work, too? And/or, when you first starting playing there, what was your take on the difference in how the English folk has evolved in the UK vs in Canada?

I love of a lot of English and Irish folk music. My father tipped me to much of it. Paul Brady, Bert Jansch, Richard and Linda Thompson. Touring over there has certainly exposed me to more music, particularly in Ireland where sessions are still happening in pubs, much like at home here in Nova Scotia. I remember playings songs at 3 in the morning in a pub in Galway with a harpist. Magic. Having said that, I don’t feel so tapped into the scene over there that I could comment with any expertise on it’s evolution. I do feel my music often connects with people in Ireland as it’s really lyric based and seems to find an audience.

What’s the last thing you listened to that wasn’t related to anything you’re working on personally?

Last weeks episode of The Best Show with Tom Sharpling. If you mean a song, then probably Joe South’s “Don’t it Make You Want to Go Home?”

Could you tell us about the first time you saw Mo Kenney play? What was it that stood out about her?

It was at a school music camp and she was 17. Her confidence as a guitar player and singer, as well as the quality of her songwriting were really impressive. She had her own voice even at a young age and I didn’t feel like she was imitating anyone. She was playing a cool song called Eden that became the first track on her debut album. She’s the real deal.

You’ve produced her two albums, as well as other people’s work, and your own… could you talk about the difference in your creative processes, between producing and songwriting?

Producing is interesting because it’s for me it’s often about trying to exaggerate an artist’s strengths. Some decisions are subtle but many are forward. It boils down to a good song so as a producer I’m always encouraging people to cross the t’s on their lyrics and melodies, making sure everyone word counts. Good production should lift a great song to greater heights and occasionally surprise you. I’ve been fortunate to work with some really talented people and I learn new things from every project.

You’re a self confessed workaholic. Say you have an entire weekend in Dartmouth with a totally clear schedule, but you can’t do anything music-related for… some reason… What would you do with yourself?

Spend it with my wife and son.

You’ve been to Victoria quite a few times now over the past decade or so. Have you had much time to explore the city, or island? Any favourite spots for food, or having a drink, or just going for a walk? And/or do you have any fun Victoria stories?

My wife, Rebecca, is from the island so I have spent a lot of time in Victoria. I like that restaurant Mo:Lé, Logan’s (run by an old Halifax friend, Chris), Beacon Hill ice cream, Tod Inlet and Classic Guitars. It’s a beautiful city with it’s history well preserved. Halifax could learn some lessons from Victoria from a heritage point of view. Chinatown is fantastic.